"They called her 'Black Diamond',

like the coal she dug from the unforgiving earth!" 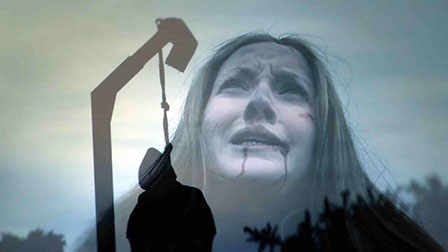 'Black Diamond' refuses to pay back a loan taken out by her father to support her people and her mine, so they murder her people and dynamite the mine.

The dark forces of the Banker's Citadel are unleashed on her community, destroying everything in their wake. She is left for dead but fights back and plots a bloody brutal revenge on the forces of capital... 'The rebellion starts here!'

Legend of Black Diamond is a British fantasy movie produced in Scotland and written by Graeme Campbell for Glass Bullet Pictures.

Graeme specialises in original stories of the strange and the fascinating. Working within the fantasy/science fiction/horror genre, he operates very much in a niche genre on the fringes of the Scottish Film Industry and his films reflect that.

Graeme's latest film, 'Legend of Black Diamond' was completed in 2015 and is a futuristic fantasy western with political undertones.

He is currently shooting the time travel epic 'The Prey - Specimen Red' and has a stack of other projects ready to go.

The film's Co-Producer and Editor Laura Binnie has worked on a slate of productions from documentaries to feature films. Laura loves working in the fantasy and sci-fi genres, creating worlds the viewer can lose themselves in.

Laura was in charge of post-production on the 'Legend of Black Diamond', tasked with the editing, sound design and visual effects.